So, Romania’s choosing a Eurovision entry tonight? How fascinating. I must say that…

No, I’m sorry. I don’t really care. Because Melodifestivalen is where it’s at this evening! As I mentioned last time, it’s the first and only final I’ll be getting out of bed at a ridiculous time to watch, so even though the standard is weak, I’m super pumped. We also get to see Sarah Dawn Finer in action as Lynda Woodruff (probably to discuss Lorraine’s Euphemism or something like that), schlager queen Carola in action as herself, and what should be a thrilling voting segment. I never thought I’d say this, but bring on 3am!

In the meantime, as little attention as I’m willing to give to Romania (again, I apologise) I will acknowledge that other things have happened in the past week besides Melfest rehearsals. And here they are. Along with Melfest ramblings, of course.

Armenia (Lonely Planet) – this makes me think of my Lonely Planet book collection, which makes me happy. That association, however, is the only thing about this that puts a smile on my face. I was so hoping Armenia would come back with a bang, showing Azerbaijan what they missed, etc. But this is not a good effort.

Belarus (Solayoh) – I was practically head of the Rhythm of Love Appreciation Society, so for it to be replaced with a lame five-year-old tropical number that would have been more at home on a cruise liner circa 2003, is a huge blow. I hope this doesn’t qualify. 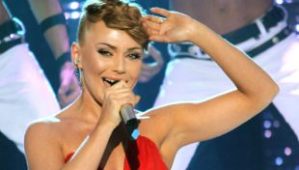 ‘Look at all these suckers, thinking my original song was going to be my eventual song. Hello! This is Belarus!’

Bulgaria (Kismet) – how are you supposed to feel about three minutes in which you like 65%, but are weirded out by the rest? Good I guess, since majority rules. I really do like the instrumental parts, and the bit Elitsa keeps repeating (technical term, anyone?).

Estonia (Et Uus Saaks Alguse) – Birgit is no Ott Lepland, let’s face it: even though they’ve both won Estonian Idol, there’s no way she looks as good in a tight pair of pants. Her ballad is nowhere near as strong either. It’s nice, and I’m glad they’ve gone for another song in Estonian, but…yawn.

Hungary (Kedvesem) – I have no idea why, but I LOVE this. Maybe it’s that same humble charm that Coming Home had for Sjonni’s Friends. I’m not sure ByeAlex will do as well as Compact Disco (it may be ‘bye, Alex’ on semi final night, if you know what I mean) but if I could vote, I’d vote for him.

Israel (Rak Bishvilo) – interesting look, great voice…average song. Okay, it’s verging on being a decent ballad, but it doesn’t exactly live up to Milim. In what is appearing to be a ballad-heavy contest, I can’t see this standing out unless something drastic happens on stage. Is there an Israeli version of Jimmy Jump?

Serbia (Ljubav Je Svuda) – guilty pleasure alert. It’s been labeled cheap, tacky and a little bit dated, and I know I shouldn’t be a fan, but damn it, I am. Yes, it is partly because we have our first JESC-to-ESC artist and that is freaking awesome. But come on, the song’s catchy! 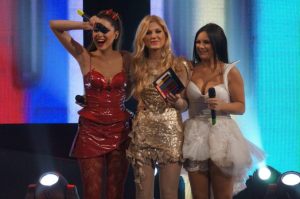 United Kingdom (Believe In Me) – sigh x 1000. Another year, another big name, another middling ballad that will struggle to make an impression on anyone from the UK. Having said that, I do like this a little better than I liked Love Will Set You Free after one listen. All we can hope for is a killer vocal and suitable staging.

Which entry of the week is your favourite?

And it will be one of the nine that isn’t Ravaillacz.

Can whoever it is do as well as Loreen? Um, no, obviously not. But it would be nice for the host country to squeeze into the top 10. At the very least they’ll get that massive cheer that I look forward to so much.

But just who will ‘they’ be, if that made any sense?

Ulrik, Ralf, Sean, or YOHIO, I reckon. Up until recently I would have gone with Ulrik straight out, but as scandipop.co.uk   (I think) pointed out, with both Robin and Anton advancing from Andra Chansen, the teenage girl votes that would have gone directly to the Munthmeister may now be divided between the three guys. I really want Ulrik to win (or Robin, the underdog) but YOHIO in particular has an x-factor and crazed fan base that will make him hard to beat. Outside of Sweden, the international juries may go for someone a little more mainstream – Ulrik, David, Anton maybe. Or they might be wooed by the sight of a grown man in a nappy being hoisted into the ceiling rafters of Friends Arena (everyone has a fetish).

Really, who wouldn’t want this man flying the Swedish flag?

Head over here http://www.svtplay.se/video/1071366/finalen-med-forsnack at around 20.00CET to watch the show live from the massive arena just mentioned. I know I will, unless some disaster happens with my alarm, in which case you won’t hear from me ever again because I’ll be too devastated to function. If you see any of my hilarious live tweets (@EurovisionByJaz) you’ll know everything’s good.

I would like to (sarcastically) thank the Former Yugoslav Republic of Macedonia – using the full name because I am not amused – for doing two things. Firstly, for announcing yesterday that my beloved Imperija would be scrapped as Lozano & Esma’s entry for Malmö, due to negative reactions in the press and on social media. Because it is only a few journalists and a handful of people on Twitter who decide the Eurovision winner, right?

The second thing is that, in dumping their entry, they totally messed up my plans of making my first 2013 ranking a top 30. Or DID THEY?

Well, no, ’cause I’m just going to go ahead and do it anyway, assuming that the new song will be just as good as Imperija and would therefore not affect my list in any way. Wishful thinking, huh.

Feel free to insert your own ‘glorious’ pun here

That concludes my bits and bobs for another Saturday. Do let me know what goes down in Romania if you watch the show there; I do still care. If you want to share your thoughts on anything else, including your personal ranking at this point, please do.

5 Responses to “Selection Season Day 9: Verdicts of the week, the Melfest final and my first ranking for 2013”