Is anybody else completely shocked that Eurovision 2012 is almost upon us? I literally feel like Düsseldorf was a few months ago, when it fact it has been just about a whole year (which is good and scary…Hooray, it’s ESC o’ clock! But where the heck have the last twelve months gone?). In fact, its been an almost-whole year in which I still haven’t come to terms with, not so much Azerbaijan, but Running Scared itself, winning the contest. This year the field has proven just as strong as that of 2011, with any number of countries having the potential to succeed Ell & Nikki on their turf. That means it could be another edition where an under-the-radar entry gets lots of 7s and 8s and 10s and ends up on top, which could be a cause of celebration (if it’s, say, Estonia) or another shocker (if it’s, say, Belgium. HA. HA.).

Anyway, I guess what I’m trying to say is that years go fast, Eurovision can be surprising, and blah blah blah.

A lot can change in a year, too. For those of us who keep listening to the songs after the contest (if you don’t, you know, that’s fine. SHAME ON YOU! Totally fine) that includes our opinions of them, and that’s what this final DIR post aims to prove. The difference between 2 or 3 listens of a song, and 20 or 30, is huge. There are some songs that begin to drive you crazy even though you liked them in the beginning, and others that you really get into after the event. 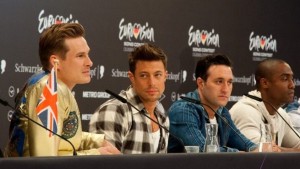 "We're number one, we're Jaz's number one! The only number one she'll ever haaaaaaaaave!! Right? RIGHT??"

Okay, so 8/10 countries are the same, and 3/10 have stayed exactly were they were – but you can’t say I haven’t changed my mind at all. Now is the time for you to chip in with your two cents. How have your opinions of the 2011 entries changed over the last year? Which songs that you formerly disliked are you now into, and vice versa? Is your favourite of the 43 still the same? I’d love to hear your answers to these questions!

For the record, I’m backing Spain, Norway and Estonia in 2012. Remind me to check back on this in April 2013 by which time I’ll be obsessed with San Marino, Georgia and Montenegro.*

* That is, if Hell has frozen over and pigs have learnt to fly by then.

NEXT TIME: Get ready to argue with me to the death, because it’s time for my 2012 reviews! First on the alphabetical-except-for-the-Big-6 list? Albania, Austria, Belarus, Belgium, Bosnia & Herzegovina and Bulgaria.

5 Responses to “The FINAL Düsseldorf in Rewind: My favourites, then and now”